I read with amusement on Facebook today of apparently there are a load of witches in America who want to “bind” Donald Trump from doing any evil. Hmm! If they are powerful enough to do that to Trump, why didn’t they cast a spell to make sure he didn’t get elected in the first place???

Anywho. What I find most amusing though is how the organiser, a Mr Michael Hughes, attempts to justify his actions. I quote:

For anyone worried about their karma, Hughes writes that binding “seeks to restrain someone from doing harm” and is “differentiated from cursing or hexing, which is meant to inflict harm on the target(s).”

I hate to break it to Hughes, or to any witch that is considering taking part in this event that Binding is itself a form of Cursing. More precisely, they are both Curses, but a Binding is a Curse with an “unless” clause attached, i.e. it usually takes the form of “I curse you, so-and-so, unless you refrain from doing evil.”

If you do not believe me when I say that Binding is Cursing, ask yourself this: imagine that although the Binding spell works, Donald Trump tries to resist its effects as best he can. What do you suppose will happen to him if he does so?

If your answer is “nothing,” or something light and fluffy – then you have not actually succeeded in Binding him.

If however you answer that something unpleasant will happen to him, then that is the very definition of a Curse.

Don’t get me wrong. There is evil in this world, and sometimes one has to take robust measures… but one should not kid oneself that there will not be karmic consequences. If one were being honest with oneself, one ought to man-up and take ownership of the karma that arises from ones binding spells and what not! Binding is most definitely is not good against evil, it is about using evil to fight evil.

OK, so there has been a lot of controversy on the interwebby-type thing about so-called Black Magick, and racism, and what-not, so I thought that I, Alex Sumner, novelist and world’s greatest expert on the occult, ought to shove in my £0.02 and clear all this confusion up.

“Black Magick” is a perjorative term for any magick which is just as vile as your own – except that you happen not to like the person doing it.

Seriously! Throughout the history of the occult, the common-ploy of every charlatan and rogue is to accuse the rival sorcerer down the road as a practitioner of Black Magick, whilst oneself is of course a White Magician. It’s a marketing ploy – pure and simple.

Moreover, as far as your typical fundamentalist Christian preacher is concerned, all magick is indiscriminately Black, because it all comes from the Devil. Even the stuff which does not look as if it does, does: because Old Nick is just fooling the gullible.

To my mind, therefore, “Black Magick” has become a thoroughly discredited term as to be effectively meaningless. Now, however, consider the following situations:

You conjure up a Demon, and you say to it:

Answer: depending on your point of view, potentially all of them. By the same token however, these can be argued to be completely different.

Situation a is in fact the rationale behind a lot of the ceremonial magick of bona fide magical orders such as the Golden Dawn, the Elus Cohens, etc, as well as magical systems such as Abramelin – because confronting the dark aspects of ones personality is something that every serious spiritual aspirant has to deal with sooner or later. Indeed, I myself have blogged about this topic before, in the context of using NLP in conjunction with Goetic magick.

Situations b is a Grey area. Depending on how the conjuration is performed it could so easily lurch from being a fairly innocent extension of the kind of thing envisaged in (a) above, through to a reasonable request to provide for the basic needs of oneself and ones family, through to something like selling ones soul to be a successful businessman / pop-star /  head of a Masonic order / etc.

Situation c sounds at first to be fairly sinister, but consider this: is it really evil, if you haven’t really harmed anyone, and all you’ve done is make yourself look like a complete cock? Actually: anyone who would seriously consider attempting such a thing in the first place is probably already beyond those kinds of scruples.

Situation d looks the most “evil” of all. However, when one considers that the Governments of the world authorise the taking of human-life on a day to day basis and call it “warfare” even this could – as far as a magician who is willing to prostitute his services to the cause of the said Governments is concerned – be argued to be justifiable. The legendary New Forest working, which is alleged to have taken place in England during World War Two, is just such an example: it wasn’t just something to defend the country, it was an aggressive act aimed at at least one member of the enemy directly and his countrymen generally. But who cares, after all they were only Germans? 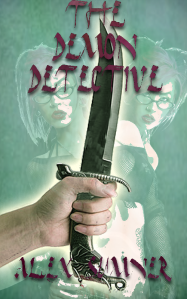 You now have the opportunity to read “The Demon Detective” – the first new material I have released since “The Magus Trilogy.” This is a Dark Fantasy short story set in and around contemporary London, and is a tale of murder and demonolatry, featuring new character Guy Shepardson.

This is only available as an ebook. It can be downloaded from SmashWords for only $0.99 in all popular formats.

For more information and to purchase a copy please go here.

My new book, Opus Secunda is published today! It is the second book in the “Magus” trilogy.

Nichola Peterson has been promoted to Detective Inspector and, with her new young partner in tow,is assigned to investigate a new murder case: that of a scientist who worked for a top pharmaceutical company. But as she probes deeper, she encounters hostility and intrigue. Her investigation – and her love-life – become increasingly chaotic. And to cap it all: the mysterious Magus re-appears and reveals he was working with the murder-victim on a top-secret project…

This is the second book in the “Magus” trilogy. Suitable for adult readers.

Both the print and the ebook edition are available from Lulu.com.

The book should be available on Amazon in 6 to 8 weeks (I shall make a further announcement when it is).

The Magus – Available In The UK

Oh Frabjous Day! Calloo, Callay! My latest spell to get lulu.com to buck their ideas up has obviously worked as my debut novel, The Magus, is now available in the United Kingdom from Amazon.co.uk. 🙂 🙂 🙂

Filed under Books, The Magus