Heretic of the Week: Dion Fortune

I don’t normally read Catholic Herald, which is why I’ve only just shared a year old story. Apparently, last month, Dion Fortune was the newspaper’s featured Heretic of the Week. I rather think they meant “hermetic” of the week, but that’s beside the point. Among Dion’s crimes are veering between Catholicism and paganism, and lowering the tone of Glastonbury, although I personally think that Kanye West is more to blame for the latter. 😉

Anywho, here is the link to the article:

What is your strangest Glastonbury story?

You have the opportunity to help me out with a writing project, and it’s all to do with Glastonbury in Somerset, England. I am currently working on a hypothesis: that Glastonbury is a lot weirder (and consequently more wonderful) than most people appreciate – and by that I mean spiritual people as well.

Sure, everyone knows about Bligh-Bond, the Glastonbury Zodiac, Dion Fortune and all the rest: but what I’m mostly interested in is the really out-there stuff that seldom gets talked about. For example, the incidents which surprise even those that thought they had seen everything – or which just struck you as highly unusual at the time.

“Happy ending” stories and anecdotes most especially welcome! Please reply in the comment section below, or use the form on the Contact Alex page to message me privately.

The Brotherhood of the Essenes

Zooming down the motorway at a hundred miles per hour – swerving suddenly off and down a country lane – tyres throwing up cascades of water as we rocketed through the huge puddles caused by the near flooding conditions. A few more twists and turns in the Moon-less darkness which storm and cloud had further conspired to obscure, then coming to a SCREECHING HALT… outside Glastonbury Town Hall.

I got out and checked the time on my iPhone – 10.30pm. We had made the mad dash from London to the Vale of Avalon in three and a half hours, although negotiating the rush-hour traffic out of the centre of the capital had devoured one hour of that. Our purpose: to attend the annual solstice Convocation of “The Brotherhood of the Essenes.”

Now you may be wondering why we attempted such a precisely timed excursion across fair Albion instead of taking a more leisurely pace. Indeed, this is what a lot of our friends did and made good use of the time saved at the pub across the road from the Town Hall. No – what actually happened is that we actually had a lodge meeting earlier in the day in London which we could not easily get out of. Therefore, instead of knocking the G-Town trip on the head, yours truly had the crazy idea that if we jumped in our cars immediately the meeting in London ended, we could get to the Convocation just in time. As it happened we succeeded: we got there with half an hour to spare.

“But what,” I hallucinate that I hear you ask, “is ‘The Brotherhood of the Essenes,’ and why are they so important?”

The Essenes are an esoteric organisation that has been going since 1920 – at least in their present incarnation. They usually meet only privately except once a year – on June 21st, when they hold their annual convocation which is open to the public. For this they hire Glastonbury town hall. They have a number of strange doctrines, some of which are recognisable as coming from the Qabalah, Astrology, and Solomonic Magick, but some are downright bizarre (even for someone like me). Usually the Essenes are a secretive bunch, but we had managed to prize a lot of their secret teachings out of one of their members by the time-honoured method of taking him down the pub and getting him drunk.*

When I went in the venue a decent sized crowd (at least a hundred or so) had already taken their places. Amongst the more soberly dressed attendees I saw a fair few strangely arrayed in bright colours – not members of the Essenes, you understand, but Glastonbury residents! In the main body of the hall chairs were set out as for a public meeting. On the stage, there were half a dozen chairs (for the senior officers of the Brotherhood) as well as a throne, with two pet-cushions to either side of it. Above the throne was a crucifix, whilst on either side of the crucifix were – strangely enough, was the portrait of a dog.

I later got the inside info on the dogs – apparently they belonged to Jesus! Or more accurately, they were His companions, so I suppose that in addition to the 12 human apostles, the Dogs were two Apostles to the Animal Kingdom which were not mentioned in the Bible. During the ceremony, whenever an Essene got up to speak, he would first bow to the throne + pet cushions, so I presume that the former was the place of the God-form of Jesus, whilst the cushions were those of the two canines. “Dog-forms,” if you will!

On the stroke of 11pm, a black robed gentleman struck a large gong (which I want for my wizard’s tower) to mark the beginning of the meeting. The whole company of the Brotherhood of the Essenes themselves processed in, in their impressive regalia. From what I gathered, they arranged the convocation in three parts. The first part consisted of some prayers and hymns, but mainly of a series of talks about the nature of the Order, its current work, its history, and the structure of the second part of the meeting. This turned out to be a powerful rite of Angel Magick. The third part essentially consisted of taking refreshments and winding down, although this itself had an important spiritual role, according to them.

Here then are my impressions of the first half of the ceremony.

1. The Essenes are at heart a Christian organisation. They incorporate many Christian prayers and hymns into their ceremonies, most notably the Lord’s Prayer and the “Nunc Dimittis.” They also believe that the Second Coming will take place in this the Age of Aquarius.

2. They are also a thorougly Anglo-centric organisation. They believe that Jesus Himself came to Glastonbury two thousand years ago, in addition to Joseph of Arimathea and the Holy Grail. Hence why the current meeting was being held there.

3. Consequently they like singing William Blake’s “Jerusalem.” A LOT.

4. The Essenes seem to place a lot of importance on certain teachings which have been received clairvoyantly or mediumistically, and hence on influential teachers who have appeared within their ranks.

5. Most significantly, however, and this was the theme most especially emphasised throughout the first half of the convocation, they are into the Spirituality of the Animal Kingdom IN A BIG WAY. This obviously links in with their fascination with the Godly-Dogs.

Their attitude may be briefly summed up in this way: the idea that man is somehow superior to animals is a purely anthropocentric conceit, but it is not how God sees things. Instead, God has a Plan for the Universe: and He has ordained that Animals have a role to play in that Plan. Hence it is highly important for man to respect the spiritual nature of the animal kingdom, to teach humility if nothing else.

What this means in practice is that the Essenes are all Vegetarians, and actively support charities concerned with animal welfare, and ending animal cruelty. Moreover one of the speakers urged those present to get involved politically trying to get the ways of both the UK and countries abroad (e.g. China) changed for the better.

The second part of the ceremony started at precisely 1am British Summmer Time, or Midnight GMT. All of the attendees formed a ring around the circumference of the hall – although we were told not to actually touch one another – while the principle officers placed themselves in the centre aisle. The Supreme Magus then led an actual magical ceremony which consisted of invoking the names of a series of Angels. From memory I recognised some of these from various Solomonic grimoires. I must admit that as an observer I subjectively felt this long invocation to be very powerful. It had been previously explained to me that the object of this particular ceremony was to thank the Angels for their work for the previous year and to welcome the ones who would aid humanity in the coming one.

At the climax of the invocation, the Supreme Magus announced “Now is the time,” whereupon, in the three minutes of silence which followed, as we had been coached to do so beforehand each attendee mentally made their own petition to the Angels for what they wanted to achieve, in the following form:

Prospering power almighty,
Prosper all my ways.
Fill my life with health and peace,
Lighten all my days.

This was explained to me that all those petitioning would, as a result of the Invocation, receive Angelic helpers that would attach themselves to the individuals throughout the year. As was ominously emphasised: “If you ask for iron bars, you will get iron bars.”

So in conclusion, therefore, what we have is an organisation which holds some very strange beliefs. Personally I thought them no more implausible than most of what occultists are regularly asked to believe as part of their training, although it did freak out a lot of others I was with that night who were completely unable to shift their paradigms, even for one second. On the other hand, the Essenes have been able to make a successful magical order with their unusual beliefs – one which has lasted longer than any Golden Dawn organisation, for example! Moreover, the Ceremony of the Angelic Names and its purported effects are an excellent way to test whether the Essenes are actually onto something.

* NB: NO ESSENES WERE ACTUALLY INTOXICATED OR OTHERWISE UNDULY PRESSED INTO REVEALING ANYTHING IN THE MAKING OF THIS BLOG POST! 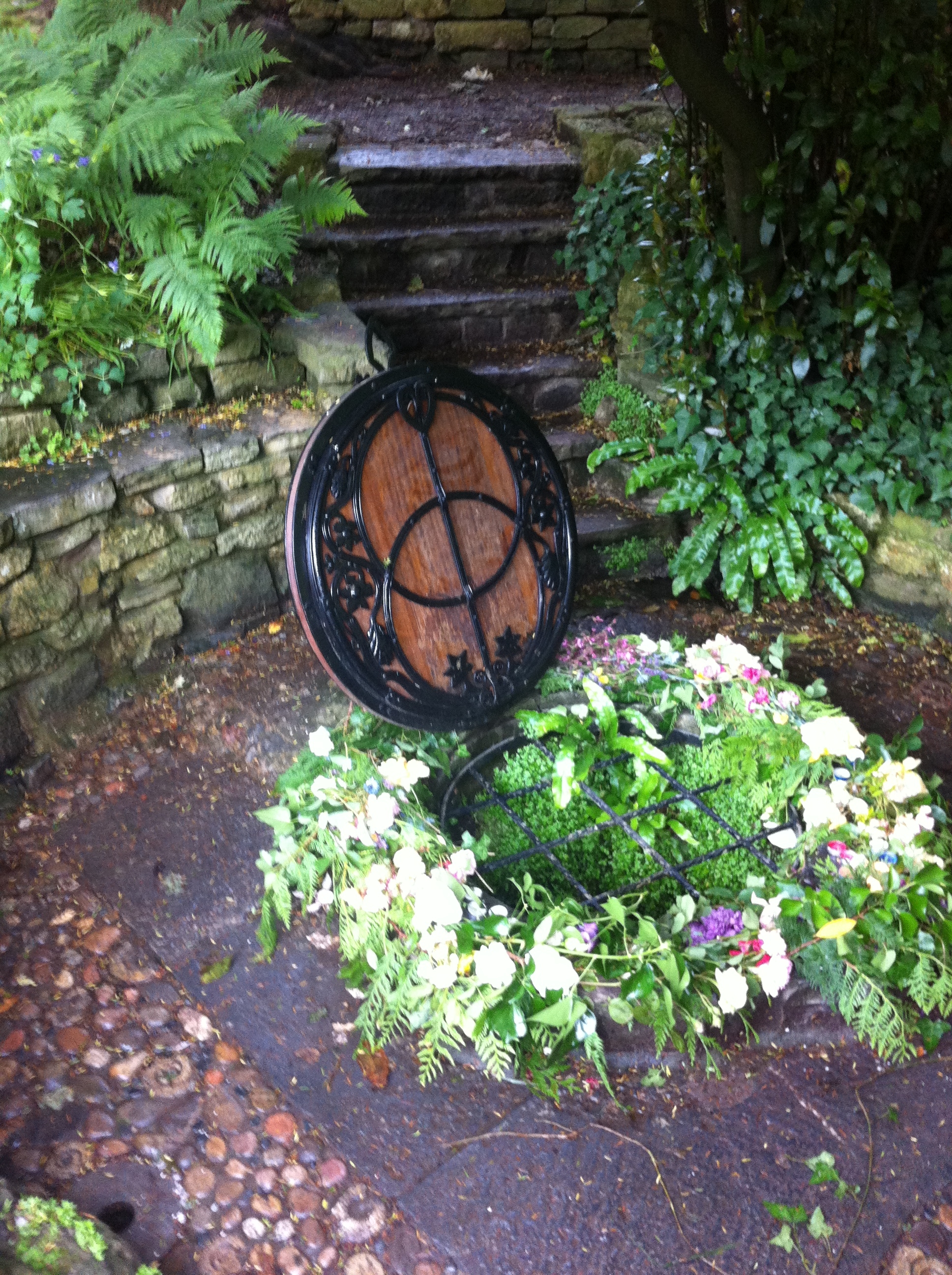 Part one of my the account of my recent Solstice adventures consists of some photos I took on a visit to Chalice Well, in Glastonbury. It had been blowing an absolute hurricane on the Tor itself, so the light breezes at ground level made the gardens even more of a calming experience than usual.

Please see my profile on Facebook for the entire album (and why not add me as a friend whilst you’re at it!)

99 Problems But Being A Mason Isn’t One

Another blog post in my series of presenting an insider’s guide to the New World Order.

How quickly all talk of Dan Brown’s The Lost Symbol fades from the public consciousness. If Google News is to be believed at all, the only hot topic in Freemasonry at the moment would appear to be whether rapper Jay Z is on the square or not. However when I researched it, apparently it is not a new story at all, it goes back to at least 2007. Apparently the evidence goes like this:

Get real! By that definition any American can get into the club by reading their own currency.

OK the guy does look as if his thumb is bent at an unusual angle. But I would be slow to draw conclusions from this.

Hmm? Might this not be more to do with the fact that people have been buying his records? Masons cannot actually produce money out of thin air, you know.

In fact, the evidence for saying that Jay Z is a mason is pretty slim. He has not done anything which could not have been achieved by not being a mason. In my opinion, the only sign of a conspiracy would have been if his contacts had managed to get him an unusual gig, which he would not have been able to get otherwise – say for example headlining at a major British festival traditionally reserved for rock acts only. 😉