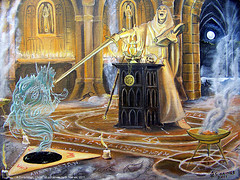 This is in response to an interesting question posted on Facebook, which I decided merited a lengthier response than can normally be fitted in to the usual reply box.

Just curious, do you guys use prayers invocations and hymns taken from books and the internet or do you write your own?

My initial response was a glib “Yes.”  However, a fuller explanation would go something like this:

I have performed a large number of rituals in my time, so I have had the opportunity to both use adapted resources and compose my own. When I first read The Golden Dawn by Regardie, I noticed that he had no qualms about copying and pasting from various sources, so I thought: “Hell! Why don’t I do the same?”

What I tend to do is use the Golden Dawn’s Z2 formula, which because it is a skeleton outline only, actively requires the composer to incorporate ritualistic passages which they have acquired from somewhere, whether that be a pre-existing source or from their own devising.

Fortunately, all of the classic grimoires are now in the public domain, and freely available on the internet, so I often use large chunks lifted from them. Resources which I would recommend include:

I do not claim to be a purist. As I suggested with the Lesser Key of Solomon above, on occasions I have made slight though not radical alterations to the words in their various forms to suit my particular purpose. For example, in regard to the Greek Magical Papyri, I took an invocation of Aphrodite for the purpose of Divination, changed about half a dozen words, and thereby turned it into an invocation of Aphrodite generally. I have published the results here – from memory I believe the words I inserted were “the knowledge of Thy divine self.”

On other occasions I have attempted to compose my own – some of which have been spectacularly successful. I have fond memories of a Mercurial ceremony I performed several years ago in which the main conjuration was an eight-line poem I had written specifically for the purpose.

Another method I have found effective is to ask an appropriate spirit-guide for assistance when composing an invocation. So, for example, weeks or months in advance of invoking Water, one might clairvoyantly go on a tattva-journey into the realm of Elemental Water and ask the beings one meets there to help compose a suitable invocation for your ceremony – likewise with other Elemental etc forces.  This can be particularly effective as then one will automatically know that the invocation is linked to the forces one has already experienced psychically.

Regarding Hyms per se, I have recently been experimenting… though not in the field of ceremonial magick. At the request of the Worshipful Master of a certain Masonic lodge, who asked not to be named, I re-wrote the lyrics of the Opening & Closing Odes for their meetings, to reflect the kind of spiritual forces envisaged by Walter Wilmshurst – a masonic writer whom Israel Regardie admired. Wilmshurst is known today as a writer on the spiritual dimension of Freemasonry: although what is less well-known is that he attempted to compose variations to the Masonic ritual which would have made them comparable in efficacy to the Golden Dawn. Needless to say, because UGLE does not deal with spirituality, according to its Deputy Grand Master, I have full confidence that my attempts at lyric-writing may yet get banned – I shall report back if this happens.

Tagged as evocation, Lesser Key of Solomon, The Greek Magical Papyri In Translation

Novelist and writer on the occult Alex Sumner discusses “Ultra Zodiacal Astrology” with tweep @IrisSchouten. This is the astrology of constellations which lie outside the Zodiac: although they are not used in conventional astrology, certain traditions both ancient and modern assign them magical and spiritual significance.