How can you return black magic back upon the sender’s own head? 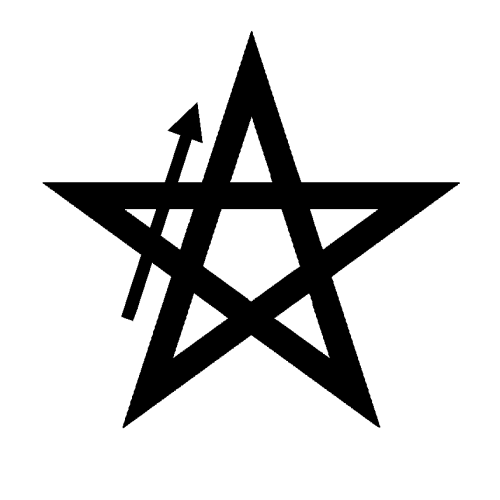 Banishing pentagram. Start from the lower left point and continue around, finishing where you started.

Those swines at Quora.com deleted one of my answers there on the grounds that it violated one of their policies. They didn’t say which policy, and on the basis that my answer did not – for once – contain any smut or bad language, I must assume it was because I included a link to Aaron Leitch’s website in it. (NB: I’m sure they had nothing personal against Aaron Leitch, it was just the fact that it was an external website).

Anywho, I was just answering a simple little question, to wit: “How can you return black magic back upon the sender’s own head?” My reply:

Witches Janet & Stewart Farrar wrote that all that is needed to send such magic back to its caster is a sufficiently powerful magical defence. With this in mind you cannot do better than the Lesser Banishing Ritual of the Pentagram, which is the classic basic protection ritual.

It occurred to me that I wrote this a few years ago, so would I have anything to add to that? If I had not been in a hurry I might have added that there are other ways apart from the LBRP, of course. For example: just by living a virtuous life. Porphyry told a story that a philosopher called Olympius once tried to curse the great Neo-Platonist Plotinus – only for the curse to bounce right off and affect the embittered upstart instead. Plotinus was by all accounts a highly spiritually advanced person, but he did not practice ritual magic as far as anyone knew, so his powers of magical protection must have arisen as a side-effect of his other spiritual practices.

There are probably many other miscellaneous techniques but the only other one of which I have direct experience is that if one actually knew what skulduggery any given sorcerer were up to, it would be possible to craft a magical defence specific to that situation. This is a rare occurrence, as usually if a sorcerer is powerful enough to cast effective magic, they will not be stupid enough to broadcast the fact they are doing so (fourth power of the Sphinx and all that), but it has happened.

I touched upon this subject briefly in a blog post in 2009 (“Lucid Dreaming“). Since then I have had experiential evidence of actual “Translucid Dreams.” It appears that other writers had had experience of these phenomena, which I only discovered after writing the blog post referred to above. Ken Wilber actually described them in his book One Taste as “Pellucid Dreams” as opposed to “Lucid Dreams.” I also discovered that one tradition in which I had taken a vow of secrecy advocates the practice as part of its teachings, without me realising beforehand! Oh well I shall not disturb their privacy – I have already stated my position on oaths of secrecy.

Anyway, the position is this: what I call a “Translucid dream” is a Lucid Dream in which one experiences Transpersonal states of awareness. The basic technique appears to be: starting from a lucid dream, dissolve all dream images until one is left with nothing. I believe that the great Neo-platonic adept, Plotinus, who was said to have been united with God four times whilst still in the body, was conversant with a similar technique – or at least that is what I understand from reading David Godwin:

The way to achieve these states was by contemplation. One recommended technique was to visualize the universe and then mentally abolish its limitations.

It occurred to me that as lucid dreaming and astral projection are two forms of the same phenomenon, it ought to be possible to achieve “trans-astral-projection” as well, if you will pardon the inelegant use of language. Be that as it may, when I first tried to achieve translucid dream states I found I could momentarily dream about nothing, but it did not seem to be particularly impressive. Then however, one night recently, I spontaneously realised what the final or at least next step was. After having dissolved every astral phenomena and then thought “what next?” on the spur of the moment I dissolved the dissolver.

The result was astounding. I ceased to exist – and yet when I re-incarnated an indeterminate time-later – coincidentally not a million miles away from where I remembered I was before this catastrophe – I was aware that SELF had been conscious of the experience the whole while. SELF had experienced Nothing – i.e. not nothing-in-particular but actual Nothing. In slipping off the clothes of Ego, SELF had also managed to escape from the inertial-frame of every object in the material universe. This is why I refer to “an indeterminate time” – I really have no idea whether the experience lasted five, ten, twenty minutes, half-an-hour or more.

Moreover it was a particularly powerful experience – even the memory of this moment of SELF-awareness grips my imagination writing sometime after the event.

That such “peak experiences” are possible are not so surprising when one considers this is exactly what people like Patanjali and all the great Yogis from history have been talking about for more than two thousand years or so. However, what I find remarkable is that it is possible to achieve such experiences whilst dreaming. It strikes me that, in Yogic terms, the Lucid Dream state is a perfect example of Pratyahara, or “sense-withdrawal,” the fifth of the eight-limbs of Raja Yoga. The mind of the Lucid Dreamer is conscious but perfectly detached from all external influences. Hence the Translucid dream would be equivalent to directing the mind towards the sixth, seventh and eighth limbs – Dharana (Concentration), Dhyana (Meditation), and Samadhi (Contemplation/super-consciousness).

Hence: the Translucid dream phenomenon is not an end in itself, but a useful tool for progressing on the path.