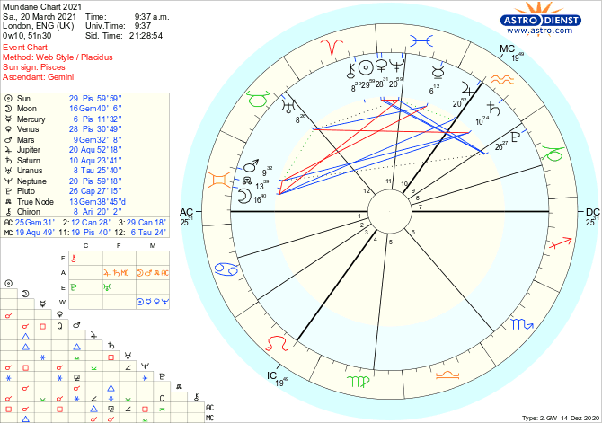 What the Stars have in store for the UK in 2020

Happy Equinox! In case you hadn’t noticed it, it is now Aries season, and consequently, Spring has officially arrived. At this time of year Astrologers are able to prognosticate on what the future holds for the year ahead, by resorting to “Mundane Astrology” – which involves drawing up a chart for the precise moment the Sun hits Oº Aries.
Here is what such a chart looks like for London, UK:

The actual moment of the Equinox was 11.49pm GMT.

We can note straightaway that the Sun – representing the Government – is in the fourth house, representing homes, housing policy and the living conditions. Given that increasingly large numbers of people are currently being forced to stay at home due to mass hysteria ahem, I mean COVID-19, we may expect that a major drive in Government policy in the coming year will be to introduce important reforms for people who are trapped indoors – to improve their conditions.

It is tempting to view the Quadrivium of Mars / Jupiter / Pluto / Saturn all in Capricorn as indicative of the current public health crisis itself. That they are all lying in the Second House in the above chart emphasises how, in very general terms, this will affect the Economy. However, because of the nature of the planets concerned, we can be more specific:

Furthermore – in a massive case of “I TOLD YOU SO,” the forces of BREXIT and those who supported it will prove to be a continual drag and hindrance on positive efforts to deal with the public health crisis, despite the Press and Media trying to protect them from negative publicity.

As we hit this Equinox, the Sun is moving into conjunction with Chiron, the Wounded Healer. This would suggest that the predicament the Government now finds itself in is in effect the result of an “untreated wound” that has been ignored for too long – e.g. that the UK is plainly unprepared for a major health crisis. The upside of this is that the Government can learn from what is happening this year, so that it can ensure a crisis of this magnitude never happens again.