Kether, in the TOLPIAS system, is the “north pole of the ecliptic” as opposed to the celestial north pole. The co-ordinates for Kether can thus be worked out precisely as 18h 00 Right Ascension, +66º 30′ Declination.

This can be shown on a star map here. Focus on the exact centre of the screen as you zoom in and out. It turns out – as expected – to be right in the middle of the constellation Draco. Below is a rather unhelpful NASA photograph of the same co-ordinates: 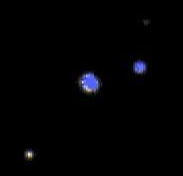 It’s the dot in the centre.

The nearest star to those co-ordinates is 42 Draconis, otherwise known as Fafnir, named after the dwarf who turned into a dragon. Curiously it has a planet, 42 Draconis B, supposedly named “Orbitar,” for no particularly good reason, other than some astronomical society submitted it as the winning entry in a naming competition.

It seems like the occult community missed a trick here, by not getting its act together!

One curious fact about Fafnir is that it may be Kether to us, but it is the (Northern) Pole Star for the Planet Venus.

Incidentally, if you are wondering, “Malkuth” in the TOLPIAS system would be at 6h RA, -66º 30′ Dec, which is closest to the star Eta-1 Doradus in the constellation Dorado, the Swordfish (or Dolphin) – also the (Southern) Pole Star for Venus.