Part of the Abramelin process is preparing the word squares – all two hundred and fifty five of them – for use in the final ritual. Which leads me to wonder: how do I know that any of the word squares are in fact correct?

This thought arose when I was going through each of them in the Book of Abramelin – when I noticed that one of the squares – the 12th square of chapter 5 in book four – to obtain servant spirits in the form of an ape – contained a mixture of six and five letter words – there was not indication how words of differing lengths were expected to fit into a square.

Enquiring on a Facebook alerted me to the fact that one Abramelin manuscript is located in the University of Leipzig’s library, where it is called Cabala mystica Aegyptionorum et Patriarchum, das ist das Buch der wahren alten und gottlichen Magia geschrieben von Abraham den Sohn Simonis an seinen jungern Sohn Lamech – Cod. Mag. 15., i.e. “Mystical Cabala of the Egyptians and Patriarchs, which is the book of the true, ancient and Sacred Magic, written by Abraham the son of Simon, to his younger son Lamech.”

If you are able to read German, you can download the actual book here – but it is only available fifty pages at a time (there are four hundred and seventy pages in total).

Searching through the manuscript, I came to a word square which at first glance looked like the one I was after – although there were several differences in spelling, e.g. “CEHHER” instead of “Cephir” in both Dehn’ and Mathers’ version. 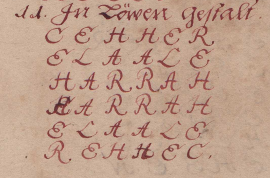 On looking closer it quickly became apparent that the order and attributions in the manuscript differed to both Dehn and Mathers. For example, the 10th, 11th and 12th squares in the Leipzig version were:

I presume Dehn decided on his own attributions by comparing it with yet more manuscripts. This makes me wonder, though, although we may be able to find the manuscripts and look at them, how can we possibly know if any of them are “correct,” in the magical sense? Is a mistake really a copyist’s error, or was it written down by an actual magician who found that that particular variation happened to work for him?

The word squares in chapter five are supposedly under the presidency of the Holy Guardian Angel himself. So ultimately, the only way we can be sure is after attaining Knowledge and Conversation, and thrashing out the problem with the HGA itself.

If you have enjoyed reading this article, please consider making a donation to my Just Giving page – raising money for poor and vulnerable families affected by the Covid 19 lockdown.

All thanks to God and my HGA for being able to participate in the Sacred Magic.