BREXIT Astrology Problems OR What a difference 6 minutes makes! 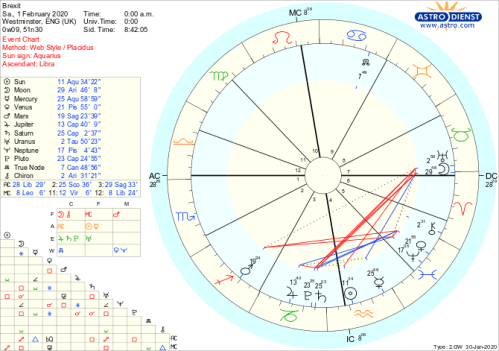 So here’s my dilemma. BREXIT officially happens at 0000 GMT on 1st February 2020. In trying to draw up a chart for it, and taking London as the “place of birth,” I notice that the Ascendant is in Libra, but right on the cusp of Scorpio. In other words, if BREXIT happened six minutes later, it would actually be in Scorpio.

Why is this a problem? Because if Libra, then the Lord of the Ascendant is Venus, which I interpret to mean that the public face of the new BREXIT-regime will be all smiles: it will be dominated by the arts and popular entertainment, in particular the National Lottery, and PR campaigns fronted by glamorous young women. There will be a honeymoon period in which people are idealistic about it, at least at first.

However, if Scorpio, then the Lords of the Ascendant are Mars and Pluto, which means moody frowning instead of smiles. The same persona of the new regime will either be all armed conflict, civil unrest and economic instability (i.e. Mars); or perhaps Government upheaval and lone terrorist attacks on Britain’s transport networks (i.e. Pluto).

So please, my loyal blog-followers! Which sign do you think will exert the most influence over the new political situation? Vote now in my new poll!

One response to “BREXIT Astrology Problems OR What a difference 6 minutes makes!”