What the Stars Have In Store For… Gareth Southgate

Gareth Southgate was born on 3rd September 1970, in Watford, Hertfordshire, in England. Birth time unknown (as far as I can find out), so I have approximated it to 12 noon for the purpose of computing his horoscope, as follows:

This may be briefly analysed thus:

Gareth is a mastermind and a healer, but his emotions are rather whimsical. Friendship is what makes him emotionally happy.

He thinks in a fruitful way, but can communicate his thoughts and needs in an impatient way, and might often be hasty and impulsive – in doing so going against his natural inclination for patience and caution.

He expresses his energy in an efficient way: when he becomes angry, he can become violent. He prefers to stand out in a crowd than to follow. He should watch for a tendency to be stubborn or dogmatic, which can impede his progress in life and cause unnecessary delays or obstacles.  He can be very temperamental, but he tends to get over things quickly.

In love he will be thoughtful and he seeks support.

Attracts the most good fortune he puts his “all” into a project or undertaking, and uses his magnetic powers to heal others. Enthusiastic for deeper studies and meanings, all that is taboo or mysterious, psychology. Values decisiveness, intensity, willpower, commitment, and strength. Very strong problem solver who cuts to the chase.

You are very persistent in carrying out your goals.  On the positive side, you are a tireless worker and have determination, discipline, organizing ability and can go the distance when those around you fall. Hard work is your forte. Your feelings are serious, well-controlled and not easily changed, although at times it may be hard for you to forgive and forget. Loyalty is important to you. Building structures that last is a need you have.

Otherwise he has an easy, likeable charm: although he finds the Mr Nice-Guy image that the public have created for him both a blessing and a curse.

The celebrities he is most like, personality speaking, are fellow footballer-turned-manager Ruud Gullit, English monarch Richard the Lionheart … and Tsar Ivan The Terrible. 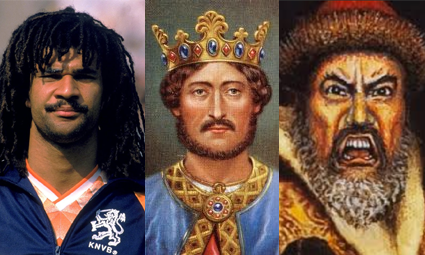