David Bowie, seen here trying to give the Hailing Sign of a Fellowcraft Freemason!
(“Heroes,” 1978)

This is a follow-up to the article I posted on Thursday concerning David Bowie, in which I made the point that he incorporated esoteric symbolism even into the last video he released before his death.

In the 1997 interview quoted at the top of the article, Bowie revealed that he was influenced by Arthur Edward Waite and Dion Fortune, and briefly described the kind of occult practices in which he indulged. Now, it’s obvious to me that he was simplifying it for a non-magical audience, but from what he said it is clear to me that he was practising what I would call proper occultism – specifically the kind of Clairvoyant experiments undertaken by the Hermetic Order of the Golden Dawn.

In Golden Dawn terms, Clairvoyance does not involve somehow seeing what is occurring elsewhere in the normal, physical world, beyond the range of ordinary sight: this instead is nowadays known as “remote viewing.” Instead, Clairvoyance, of the type Bowie described in his interview, involves seeing magical phenomena on the Astral Plane. The Astral Plane is a nebulous continuum which, in its lower reaches, is nothing more than the world of dreams which we all experience, but in its upper realms is where magical and spiritual forces manifest as phenomena which one can observe and with which one can interact.

This would imply Bowie would have had to have spent a lot of time studying the Qabalah, in order to gain the requisite background knowledge, but most of all, it would have meant learning to master the art of Astral Projection.

A typical Clairvoyant exercise would be what is known as a Tattva-journey. A “Tattva” is a symbol derived from Tantric art representing one of the metaphysical Elements. These symbols the Golden Dawn appropriated for itself to express the Elements known to western occultism. For example, this symbol represents Fire: 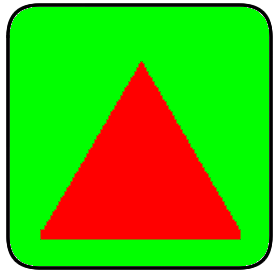 So, the kind of thing that Bowie would have done would go like this:

Firstly: stare intently at the tattva-symbol chosen for that particular Tattva-journey.

Secondly: suddenly transfer your gaze to looking at a plain white surface, e.g. the wall. If you have been staring intently enough, you will see a negative image of the symbol appear on the wall. Thoroughly familiarise yourself with this image so you can visualise it before your mind’s eye.

Thirdly: astrally project, imagining that the image you are visualising is a doorway to the astral plane, and you are projecting yourself through it.

Fourthly: you should now find yourself in a magical realm – it is the astral equivalent of the force whose symbol you have just been visualising. At this stage, remain perfectly still – do not attempt to move about on the astral plane, but instead start chanting (or “vibrating” as it is termed in Golden Dawn literature) the Divine and Angelic names associated with your chosen Tattva-symbol. This is where prior knowledge of the Qabalah is essential. One should also make the appropriate grade-sign at this point. Technically, these would have only been taught to you if you had gone through the corresponding Golden Dawn initation ceremony, although they have been published for getting on for over 80 years now.

Fifthly: a creature or being should appear, and respond well to your chanting (if it doesn’t respond well, banish it, and wait for one that does). This is your Spirit Guide for this realm, and with its assistance you can now go exploring and find out all about the magical and spiritual implications of the realm you are visiting.

Sixthly: once you have finished exploring, return to the point of entry, thank your guide, and come back out of the Astral Doorway, back to the physical plane, your body, and to normal consciousness.

Speaking from personal experience, the Spirit Guides that one meets when going on these Clairvoyant-excursions can become valuable allies for performing magical operations in the future. For example, if one were to venture into the Fire tattva, pictured above, and made contact with a Fiery spirit-guide, and returned on subsequent occasions so as to build up a relationship with it, one could get to the point where one could call on this spirit-guide to help you with some other ritual involving the element of Fire, such as consecrating a talisman, or something similar.

Or, depending on which symbol or symbols you chose to work with, you could ask the spirit guides you meet for help with various aspects of your life – such as deriving inspiration for creating a new work of art – or even for composing a new song.

In the Stella Matutina, which was a magical order which succeeded the original Golden Dawn, papers were circulated amongst members who attained the grade of Adeptus Major and higher, which made the point that the same Tattva-journeys which the members had already learnt to make could be extended in scope for advanced magical projects – such as attaining knowledge of one’s past lives, learning the occult history of this planet, and making contact with discarnate spiritual masters.

In conclusion, this is basically what Bowie would have done. I presume this must have been in the earlier part of the seventies, before his excessive cocaine use started making paranoid about witches, and Jimmy Page, and so forth. NB: Bowie was afraid that witches were trying to steal his semen. I rather suspect that any witches that were, were not doing so for some nefarious purpose, but because they simply wanted to have sex with him! 🙂