How To Create Your Own Tarot Deck, part two

This is a sequel to a post I wrote last year. So I finally went and did it: I put my money where my mouth is, and used one of the sites mentioned in my previous post, makeplayingcards.com, to convert a set of tarot cards I had designed into an actual deck. It will not be commercially released, for two reasons: firstly, it is far too derivative of other well-known decks, so there would be a rights issue if I tried to do so; and secondly and more importantly, I don’t claim to be a great artist.

The Majors and the Court Cards I created from the BOTA deck, which is deliberately printed black and white for the purpose of colouring in – as one learns about the colour correspondances of the Tree of Life. I didn’t paint the actual cards, but large scans thereof, which I then re-scanned once finished. The pip-cards, on the other hand, were mostly done with Photoshop (except for the suit of Cups). Incidentally, the pip-cards on the BOTA deck are a bit of a let-down compared with the art-work of the rest of the deck. I ended up photoshopping scans of the Rider-Waite: not only re-colouring them, but also altering the background imagery to suit my own particular interpretation of the symbolism. 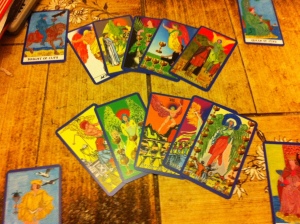 Pentacles. Earth. Assiah. Princess Scale. The Gods as they are ensouled in the material universe (or in other words, “the Planets”).
Copyright Alex Sumner 2015

Ten out of the seventy-eight cards ended up being original compositions, not based on any pre-existing tarot card. For the back, I printed the text of the invocation used in the Golden Dawn at the start of every tarot reading, for the practical reason that if I put it there, I wouldn’t forget it!

I have to say that the emotional satisfaction of getting this project completed – which is no small thing, subjectively speaking – is the exclusive advantage of this method of acquiring a new tarot deck. It is neither a costly nor timely method. Quite apart from the effort in trying to assemble all the images necessary, the website I went with, makeplayingcards.com , outsource their manufacturing and distribution to China. Not only did this add considerable time to the shipping, I discovered they stopped work over the Chinese New Year period, which of course is a major holiday for them.

One response to “How To Create Your Own Tarot Deck, part two”