Nick Farrell has managed to surprise everyone – probably not least himself – by actually meeting a Secret Chief. I believe that Nick is completely genuine in his account as, without wanting to brag too much, according to my contacts in the Illuminati his description pretty much ties in with what I have long suspected. 😉

He [i.e. the purported Secret Chief] was extremely interesting having been connected with lots of magical orders and alchemical groups that I had never heard of.

Well, I am pleased to announce that I can now fill in the missing bits of the jigsaw puzzle, and reveal such information as can be revealed about this mysterious group of continental adepts. 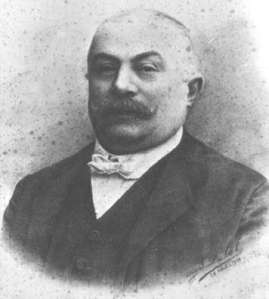 The magical system employed by this Corsican gentlemen was originated by one Giuliano Kremmerz, who lived from 1861 to 1930. Kremmerz founded two magical orders: one, the Confraternita Terapeutica e Magica di Myriam (The Magical and Therapeutic Brotherhood of Myriam), and the Ordine Osirideo Egiziano (Order of Osiris the Egyptian) – which, I am informed, is the “inner order” of the first.

The Myriam Order was (and perhaps still is) an order devoted to healing illness by prayer and ritual.

The Order of Osiris was described to me in the following colourful terms. In order to join, one has to be: (a) Italian, or fluent in Italian; (b) able to attend meetings in Italy; and (c) a multi-millionaire jet-setter. As to its rituals, they were described to me as: “Have you seen Eyes Wide Shut by Stanley Kubrick?”

Given that I fail to meet criteria (a), (b) and (c), I must resign myself to the fact that I shall probably never become a member of this organisation. 😦

However, by delving into the paucity of information available in academia, I discovered: the secret teachings of the Order of Osiris have been published since at least the mid 1980s. However, because they were only revealed in a very limited print run publication, and it has not been translated into English, these teachings are virtually unknown in the Anglophone world.

, that Alex Sumner is writing a blog post about us!

I have been asked to point out that the said teachings were published illegally and without authorisation. Therefore translating them would also be illegal. Indeed, the publication of the teachings caused a major scandal in Italy, with fights breaking out in the street between orders and talk of people calling upon their connections if you know what I mean. (Actually, there are a whole load of teachings from funky continental orders available to people who can speak German, French and Italian, but because English speakers have not heard of them, they remain untranslated – but that is a different story altogether).

However one academic, Hans Thomas Haakl, was able to get hold of a copy of Kremmerz’ work and (taking his life in his hands, no doubt), made a prècis of it in the English language. * The sex magical / alchemical teachings may be summarised as follows:

One of the basic principles of sex magic is described with reference to sexual union. “Whoever copulates thinks, imagines, projects the reality of his thought into the sperm. . . . The female blood nourishes and feeds this image projected into the sperm, because woman is subject to the male thought due to her desire and voluptuousness.” The text also states that a woman can be influenced only “when she is hot.” If this condition is fulfilled, a man is capable of changing her completely and may turn her into his servant as well as into an ascetic nun. If, however, “she is not burning with desire, do not try.” Violence is not recommended, because “in nature everything is achieved by degrees.” Preparation by means of long periods of fasting and absolute chastity, in body, mind and emotion, is necessary in order to become master of oneself and build up a superior force.

This is an operation of “internal alchemy” (the body being the laboratory, that contains all the substances and instruments needed for the Great Work), which requires a perfect knowledge of one’s own body and its various hidden planes.

The sexual / alchemical operations serve to at the same time gradually separate the “solar” or spiritual part of the practitioner from the merely physical part, and create a “glorious body” in which the solar part may live thenceforth. This Glorious Body is not subject to physical death, hence (theoretically), immortality ensues.

However, this is not the end. Kremmerz goes on to state further advanced teachings which are even more revolutionary than this. He states that it is possible to become a “magical avatar.” In the Yogic tradition, an avatar is someone who is incarnated as a perfected being, e.g. Krishna. Kremmerz states that it is possible to invite a “numen” or the soul of a genius, hero or deity to drive out one’s human soul and inhabit one’s body instead. Or, to use the modern parlance, to voluntarily cause oneself to become a “Deific Walk-In” – which I suppose could be one interpretation of the secret of the grade of Ipsissimus.

Ah but which deity? This Kremmerz does not specify. Apparently there have been different Kremmerzian groups – some of which believed they were inviting the actual Christian God to “walk-in” – hence they regarded themselves as Christian Magicians. Haakl implies however that not all Kremmerzian groups shared this objective.

However: there is a more sinister theory talked about, which sounds like the kind of plot I might want to borrow for one of my books, in that it is suggested that the less scrupulous magician might decide to pick someone younger and healthier – and drive out their soul, and go and live in their body, and hence prolong their existence that way.

But Is It All Golden Dawn?

The question arises though, is can this “Secret Chief,” whom Farrell met, and the tradition which he represents, authentically be said to be part of the Golden Dawn. IMHO, the answer is no, for two reasons (the utter dissimilarity between these practices and GD practices not being one of them).

Firstly, the Order of Osiris cannot have been created before 1898 – a good seven years after Mathers is alleged to have received the 5=6 ritual and the corpus of Inner Order material.

Secondly, the fact that Kremmerz’ secret teachings were revealed in the mid 1980s means that there is no way of knowing whether any given Secret Chief has provenance back to the original Order of Osiris, or is in fact a modern reconstruction group. In fact, Haakl himself states that several groups branched off from Kremmerz and interpreted his teachings in their own ways, long before his teachings were ever made public. So it would be difficult to tell if any group has such provenance even if it were not a reconstruction.

In conclusion, I would say this. I genuinely believe that the Order of Osiris and the teachings of Kremmerz are intriguing and worthy of further study by magicians in the English speaking world. However, I would further say we should be honest and say the Order of Osiris is a magical tradition in its own right, and not necessarily a bolt-on to the Golden Dawn.

* Haakl, H T, 2008, “The theory and practice of sexual magic, exemplified by four magical groups in the early twentieth century,” published in Hidden Intercourse: Eros and Sexuality in the History of Western Esotericism

17 responses to “The Secrets of Hermetic Internal Alchemy – Revealed”