This year being the one that comes after 2012, and just before 2014, there has recently been a rise in chatter about superstitions, nay, phobias regarding the number 13. I will therefore take this opportunity to present an initiated view of the matter.

People say that 13 is unlucky, but that is a popular misconception: 13 is only unlucky for Christians. For Satanists, on the other hand, 13 must be quite jolly! Seriously, though, the unpleasant associations of centuries of folklore have got in the way of the fact that in the Qabalah the number 13 is a lucky number, for completely unsinister reasons.

In Hebrew Gematria, the word for “love,” Ahebah, enumerates to 13.

It gets more interesting when one analyses the symbolism of the Hermetic Order of the Golden Dawn. In the 1=10 grade of Zelator, the candidate is admitted (in the first part of the ceremony) with the admission badge of the Fylfot Cross, which is a clockwise swastika (i.e. the reverse of the Nazi symbol) comprising seventeen squares. The squares represent the 12 signs of the Zodiac, the four Elements, and the Sun; and they are arranged so that each of the four arms corresponds to one of the elemental triplicities, with the Sun in the very centre. The arms are (clockwise from top-left): fire, water, air, earth. Moreover each arm is arranged in the same order: the Cardinal sign of a given element is closest to the centre, followed by the Fixed (Kerubic) sign, then the Mutable sign, and finally the symbol of the Element itself at the extremity of the arm.

Now this seventeen-squared fylfot cross has in effect been cutout from a square of twenty-five individual squares – five by five – the same dimensions as the Kamea of Mars. So one day I thought to myself: what would happen if I superimposed the fylfot cross on this very Kamea? I immediately noticed the following: the number of each sign of the Zodiac, when added to that of the sign which opposes it, equals 26, 2*13, the number of the Tetragrammaton. E.g.:

Moreover the central square – corresponding to the Sun – is 13, the Number of Unity / Love.Therefore, the Neophyte enters the Zelator hall with the aid of a symbol which suggests that all dualities are ultimately to be resolved in the form of Yod Heh Vav Heh, thereby leading one to Unity. 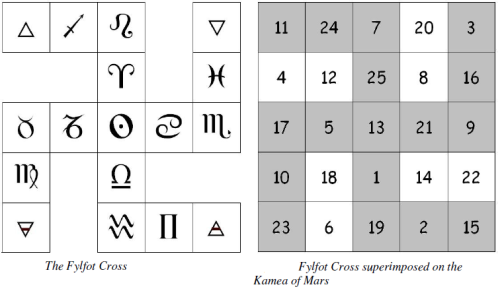 This is just one example: given the central importance of the Tetragrammaton to the Qabalah one should not be surprised that the number 13 may crop up throughout the Western Mystery Tradition, even where one would not expect it.

Tagged as Golden Dawn, Love of the Number Thirteen, Qabalah