Who is left among you that saw this house in her first glory? and how do ye see it now? is it not in your eyes in comparison of it as nothing?

Despite the terrible news from Paris, the conflagration that befell Notre Dame has now been extinguished and, while the roof and historic spire have collapsed, most of the stonework including the historic towers is still intact. This is highly important, from an esoteric point of view. 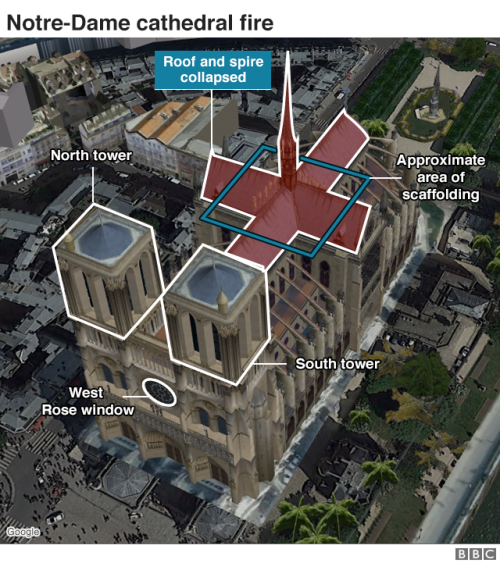 Notre-Dame Cathedral.
“The 850-year-old Gothic building’s spire and roof have collapsed but the main structure, including the two bell towers, has been saved, officials say.”
(BBC News)

Although the world has been experiencing a collective panic about the art-work inside the Cathedral, there is still an enormous amount of art built into the fabric of the building itself. Take for example the North and South towers (see above). Note how they resemble two great pillars standing at the entrance? They represent Boaz and Jachin, the two great pillars which stood at the entrance to King Solomon’s Temple. 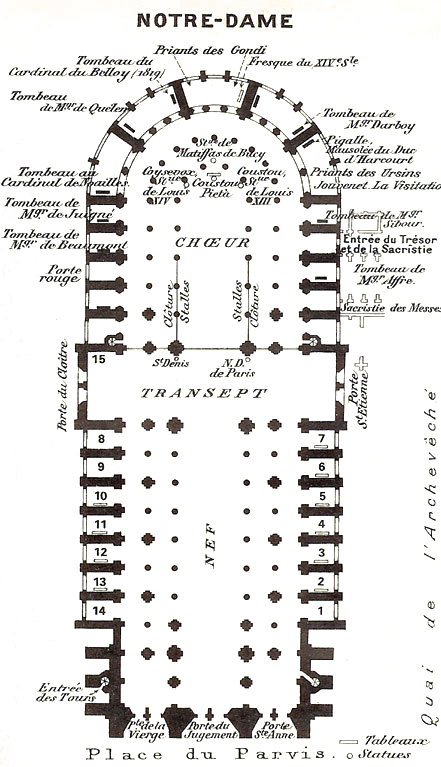 The ground plan of the interior follows a cruciform design, as is common in Christian churches. Moreover it is possible to overlay the Qabalistic Tree of Life over the design as well, such that the high altar represents the Supernal Triad; the Choir to Chesed and Geburah; the Transept to Tiphereth; the Nave to Netzach, Hod and Yesod; and the entrance to Malkuth.

… with Tree of Life superimposed.

Whilst the Tree of Life may be a latter interpolation, there can be little serious doubt that the masons who worked on the original structure did observe the principles of Sacred Architecture, in trying to incorporate the symbolism of both the Old and New Testament into the Cathedral – hence indicating the mysteries upon which Freemasonry is based.

The Mystery of the Cathedrals, by Fulcanelli

The best exposition of sacred architecture in regards to Gothic Cathedrals in general, and Notre Dame in particular, remains that of Fulcanelli. He introduces his theme by stating:

Above all there is nothing more captivating than the symbolism of the ancient alchemists, so ably translated by these modest medieval statues. In this connection Notre Dame of Paris, the Philosophers’ church, is indisputably one of the most perfect specimens and, as Victor Hugo said, “the most satisfying summary of the Hermetic science, of which the church of Saint-Jacques-la-Boucherie was such a complete hieroglyph.”

Mediaeval Alchemists would use Notre-Dame as a meeting place. Moreover, the design in inherently alchemical: its cruciform manner points out that the “Sign of the Cross” represents the preparation of the Stone (cf: the Transept – which “crosses” the Cathedral – effectively refers to the Gold of Tiphereth). The Rose window above the western door represents the wheel of time – the time necessary to concoct the stone. Moreover the main west door – the “Porte Du Jugement” – is elaborately decorated – superficially to represent the last Judgement, but on closer examination contains a plethora of Hermetic symbolism. 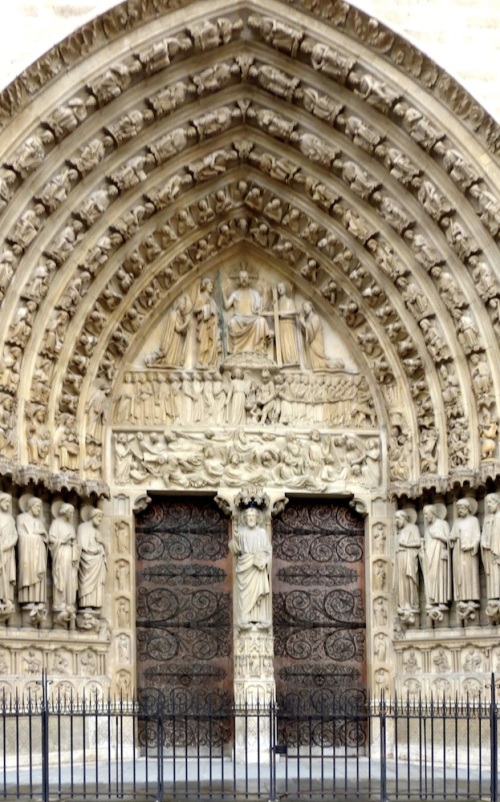 Fulcanelli also points out Hermetic symbolism to be found elsewhere on the Cathedral’s exterior (e.g. the “Porte de Saint-Anne” to the right of the “Port de Jugement”). Curiously, the vast majority of the Alchemical symbolism is on the outside of the Cathedral, at the entrances: perhaps signifying that Alchemy is ultimately about purifying oneself, so that one is then worthy enough to enter into the Holy of Holies.

It is gratifying that within 24 hours of the incident millions of Euros have already been pledge to aid its restoration, as the sooner the building again becomes fit for worshippers – both exoteric and esoteric, the better.