The Novels of Alex Sumner: now on Google Play

Android users rejoice! You now have the opportunity to purchase my novels as ebooks from Google Play! This is in addition to Amazon Kindle, and iTunes. If you have an Android-enabled smartphone or tablet and want to both terrified and yet strangely aroused by some visionary & metaphysical fiction, follow these links:

You now have the opportunity to buy all of my paperback novels, including especially The Magus Trilogy, as I originally intended them. I have spent the past few days migrating them to CreateSpace, so they are no longer on lulu.com.

Grr! All this aggravation about lulu… you know it makes me want to SHOUT!

A cautionary tale for both my readers and for other Authors! Please read on…

Not that Lulu. Unfortunately.

One of my loyal readers has informed me that the paperback versions of The Magus Trilogy are not available from Amazon except through third party sellers and then only for silly money! On investigation, I found the facts to be as follows:

On redeeming the Sumner Family Brain Cell from the local pawn shop and re-engaging it, the truth dawned on me. Of all my novels, the three books of the Magus Trilogy were published via the website http://www.lulu.com which I had used on the understanding that it would distribute the paperbacks through Amazon for me anyway. The Kindle versions however I published through Amazon’s own Kindle Direct Publishing.

Hence, it would appear that both Amazon and Barnes and Noble have decided to arbitrarily stop selling the books I created via lulu.com, but are quite happy to continue to sell those via Amazon’s own CreateSpace!

Might this have anything to do with the fact that Amazon earlier this year were consolidating their CreateSpace and Kindle Direct Publishing ventures into one streamlined whole, and were therefore wanting to edge out competitors?

What bugs me, though, is that whatever the real explanation for this predicament – I received no notice of it from either Amazon or Lulu!

This may very well mean that you may be seeing new paperback editions appearing on Amazon via CreateSpace in the not too distant future. In the meantime, I encourage you to save a tree in the Amazon rain-forest and treat yourself to a Kindle version all the same.

Are you a Lulu-published author and have you been affected like this? Please respond in the comments below!

Alex Sumner in the UK

Updated Link for UK readers searching for my books on Amazon.co.UK

Filed under A Fairy Story By Any Other Name, A Greater Power, A Reverie On Thievery, An Unpardonable Offence, Books, Eternal Witch, Licence To Depart, Opus Secunda, Pilgrim's Progress, Shall We Kill The President?, Taromancer, The Demon Detective, The Magus, Uncategorized

You have the opportunity to buy my new book , entitled “Eternal Witch,” from May 23rd 2018. Meanwhile, in advance of my new release, I have been updating all my other books, including the first three that started them off the Magus Trilogy. 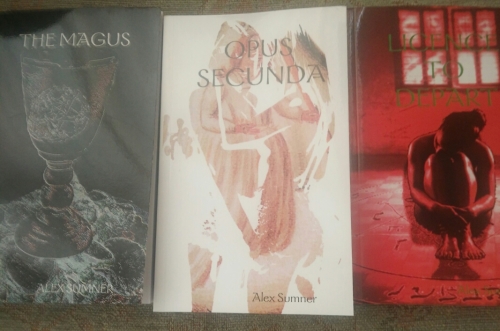 “The Magus,” “Opus Secunda” and “Licence To Depart,” are published in paperback and Kindle. For more details please see my Amazon Author Page.

Filed under Licence To Depart, Opus Secunda, The Magus

The Joy of Hex

News this week that after a witch planned a mass hexing of Stanford rapist Brock Turner by posting it on Facebook, Raymond Buckland threw a hissy fit by exclaiming “Witches do not hex!” This caused a certain amount of cynicism to manifest to visible appearance in certain quarters. The fact is that never mind what historical witches were alleged to have done or not done hundreds of years ago – the fact is that the Elders of the modern-day Craft are known to have indulged within living memory.

For example: Gerald Gardner once cursed a man into selling him his house when he was unwilling to do so. He then re-wrote the Book of Shadows to say that this was perfectly acceptable, so long as the seller gets paid a fair price for it.

Later on, Alex Sanders demonstrated a ritual technique for placing a curse on someone for the benefit of a film crew. Ironically, the same ritual technique found its way into Janet & Stewart Farrar’s The Witches Bible, although they did not make it clear that it could be used to make someone drown themselves. However, in Stewart Farrar’s earlier book, What Witches Do, he described another technique Sanders had for performing psychic abortions (i.e. on pregnant women who asked for it). The method consisted of destroying the foetus by first imagining it as a Pentagram, then magically collapsing it. The problem with this approach is that the Pentagram is the sign of an actual living being – Sanders was effectively admitting the foetus was alive, before killing it. This raises the possibility that the same method could be used on any Pentagram… but I have said more than enough.

This raises an interesting question: given that so many occultists publicly claim they never practice evil magick, just where do they get knowledge of these vile techniques, if the practice thereof supposedly does not form part of their tradition?

The answer unfortunately is that the knowledge of these evil rites is preserved, because it is good for marketing purposes. Seriously! I actually wrote about this in 2011, in my novel Licence To Depart. Without any trace of irony in relation to the quip about marketing, I quote:

“Tonight we’re going to perform a black magic ritual, to kill one who is in the service of the forces of Light,” Sir William said gravely. He paused – and then lightened his tone. “Do you know where I got this ritual from?” he asked, almost conversationally. “A book on white magic!”

A murmur of laughter rippled amongst those present. Sir William continued.

“It’s true: it’s an extraordinary fact that often the vilest, most despicable forms of evil magic are set out in the books which claim most loudly to be working for the service of the light! The mediaeval grimoires. ‘Magick’ by Aleister Crowley – that’s got at least one death-spell in it: so too has that book on Huna by Max Freedom Long. ‘Psychic Self-Defence’ by Dion Fortune – that’s got lots of black magic in it, all for the sake of supposedly warning her readers against it. Pah! To them they’re hypocritically increasing their sales: to us, they provide a valuable resource. Shock! Horror! Sordid revelations! These are just some of the tabloid-style headlines which have nothing to do with my “Interview” at Smashwords.com. Instead, you will get fascinating information about my background, influences, my thoughts on the writing profession, and the real story behind my latest book Taromancer

Smashwords is the website if you want one of my ebooks in a format other than Amazon Kindle. Taromancer will be available therefrom from March 11th 2014 onwards.

Filed under A Greater Power, Books, Licence To Depart, Opus Secunda, Shall We Kill The President?, Taromancer, The Demon Detective, The Magus

G’day. Those nice people at Amazon are starting up an Australian version of the site, which means that all my fans Down Under are now able to purchase my books! Who knows – if I sell enough I’ll be able to come over in person and visit!

Filed under A Greater Power, Books, Licence To Depart, Opus Secunda, Shall We Kill The President?, The Demon Detective, The Magus

Mexico has given the world so many valuable things, such as Tequila, Chili Con Carne, Mescaline, Carlos Castaneda, the Aztecs and Chocolate. Now, by way of saying thank you, my books are on sale there!

Yes! You now have the opportunity to buy my books in Kindle format from Amazon’s new Mexican site. See here for more details.

Filed under A Greater Power, Books, Licence To Depart, Opus Secunda, Shall We Kill The President?, Taromancer, The Demon Detective, The Magus

Oh Canada! You have given so much to the world, such as Ice Hockey, Neil Young, Donald Sutherland, David Cronenberg, *cough* Pamela Anderson *cough*, Canadian Club Whiskey, Maple Syrup, Mounties, Lumberjacks, etc, etc. So to say thank you on behalf of the rest of the world, I, Alex Sumner, am making my books available in your fair country.

And, I am happy to say, Amazon’s Canadian website is now catching up with its American counterpart! As of today, the following of my books are available:

* Amazon.ca lists these although the Paperback versions are currently (18.12.12) unavailable.

The Demon Detective, and other stories

All Kindle unless otherwise stated.

Filed under A Greater Power, Books, Licence To Depart, Opus Secunda, Shall We Kill The President?, The Demon Detective, The Magus