A friend who’s stopped reading Tarot cards, has thrown them away and turned to the church, told me I should stop reading my tarot cards in my bedroom, and that it attracts spirits. Can I have a second opinion from an experienced tarot reader? – Quora 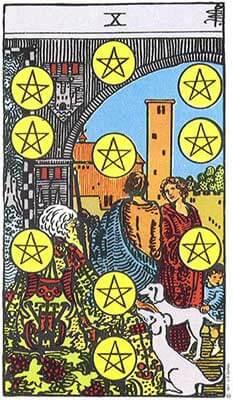 The Ten of Pentacles

Well personally, if your friend had said that to me, I would reply to them: “You say that like it’s a bad thing?”

I think the most important thing is that if you value your friendship with this person, you should behave tactfully towards them, and simply not get out your tarot cards in their presence, or talk about your tarot-activities to them. They are on their own path, and it’s up to them to realize the truth for themselves, and maybe in the future they will realize the error of their ways and come to you seeking forgiveness.

As to whether your friend is technically correct or not, unfortunately I have to say this:

In the tradition with which I am familiar, Tarot DOES attract spirits i.e. good spirits! And, what’s more: it’s supposed to!

What I mean is that in my tradition, every Tarot divination begins with an appeal to a Higher Power to give guidance to the reader when interpreting the cards. This Higher Power may be characterized as “angelic” in nature… or depending on your point of view, it may also be characterized as a Gnostic or Pagan god, a manifestation of the actual God, or an Energy of a refined or higher spiritual vibration.

Those of a pseudo-scientific bent might characterize it as a recondite part of the Unconscious which is not understood by modern psychology… yet. In any case, the Tarot cards when properly used, unlock powers within your mind, which is the key to a successful divination – there is nothing superstitious about the cards by themselves.

However, no matter how you characterize the mechanics of how Tarot works – through good spirits, angels, manifestations of Divinity, Energies, psychological phenomena, etc – from the point of view of an overly dogmatic Christian, these are all “devils” or the work of Satan even if it is not true. It is unfruitful arguing with such people, so it’s often best to keep silent.

Source: Alex Sumner’s answer to A friend who’s stopped reading Tarot cards, has thrown them away and turned to the church, told me I should stop reading my tarot cards in my bedroom, and that it attracts spirits. Can I have a second opinion from an experienced tarot reader? – Quora