Squatting In The UK: The Solution 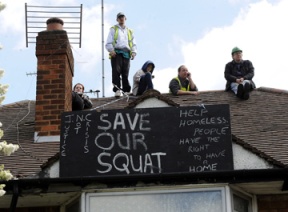 These squatters are being made criminals…

You will become a criminal as of midnight tonight (31st August 2012) if you are squatting in a property in England. This is the result of a change in the law enacted by the current Coalition Government. Up to now, squatting per se has not actually been a criminal offence. The only crime for which you could have been convicted is if you had entered the property by Breaking & Entering. If however you had managed to enter peacefully, not only could you squat but also, if the actual owner of the property never took any legal action against you, you could even register legal title to the property on the basis of Adverse Possession – even upgrading this to Absolute Possession, if the owner somehow did not get round to pursuing you (admittedly a very rare occurence).

This, however, has now been knocked on the head by the Government. There is something very obviously immoral in the illegalisation of squatting – people are essentially being criminalised on account of their poverty. The only alternative to avoid criminality is to voluntarily become homeless: so in other words, there isn’t actually an alternative…

… Until now! For I, Alex Sumner, the World’s Greatest Expert On The Occult and sometime legal expert, have worked out a perfectly feasible and legal solution to the dilemma now faced by squatters. It is this:

Simply turn up at the Ecuadorean Embassy and claim political asylum. Then you will be given a free flat in Knightsbridge!

Yes indeed, according to this news report, Julian Assange is looking forward to at least six to twelve months living in the Ecuadorean Embassy. Presumably this is rent-free – being paid for by the people of Ecuador. So it strikes me that if the people of Ecuador are prepared to give free board and lodging to any old criminal, they must surely be willing to give it to those who have been criminalised undeservedly! 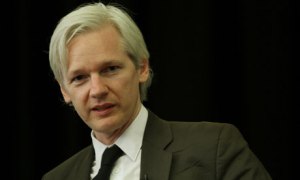 … at the same time that this criminal is becoming a legal squatter!

So, squatters, turn up at the Ecuador Embassy at Flat 3B, 3 Hans Crescent, London SW1X 0LS (nearest tube station: Knightsbridge) to claim your free accommodation today! 🙂