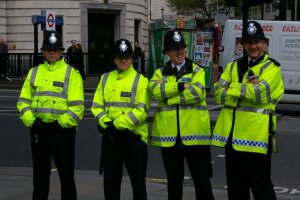 Four druids in traditional pagan costumes – according to the Daily Mail

News today that Nazi propaganda rag the Daily Mail continues its unhealthy fascination with pagans by running a piece on them that stoops to its usual levels of journalistic credibility. To wit: amongst the Metropolitan Police Force there are apparently four spiritualists, “a pagan and a DRUID” (sic) who are serving officers.

Yeah I know, technically they could have said “four spiritualists and two pagans,” and the article does correct itself later on. Still, what’s a little yellow-journalism when trying to concoct a good headline? Nevertheless: just in case there are Daily Mail readers coming to my blog to receive enlightenment to the true state of affairs, and more importantly for the comedy value to the rest of my millions of readers, I will continue.

This all comes about after someone made a Freedom of Information request to the Met in relation to non-mainstream religions. In relation to the one officer who is a druid, the Mail helpfully explains

According to the Romans, Druids practised human sacrifice 2,000 years ago, but modern day druidism – called neo-Druidism – focuses on the worship of nature, especially trees.

Pagans are described as people

… which worship a string of gods and festivals according to archaic religions which pre-date Christianity.

Spiritualists and mediums believe that there is life after death and that by holding seances, the dead can talk to the living, either through direct communication or the Ouija board.

I’m not actually sure that this is the case! If the marketing for Ouija boards is anything to go by, most of those who use them are silly people with no occult training who are out to scare themselves for kicks. Becoming a proper medium, on the other hand, involves several years training within a development circle, so that one learns not only to contact the departed but also to do so in a safe, respectful, and appropriate manner – and not to freak out when doing so. Nevertheless: I’m surprised they don’t employ more mediums – after all they could come in immensely useful in solving homicide cases!

Mercifully, the Daily Mail goes on to reassure us that:

Cheers, Daily Mail, for lumping all occultists as Devil worshippers! Nevertheless, though, the good news is that police officers are perfectly entitled, legally speaking, to hold beliefs such as paganism and druidism due to freedom of religion being enshrined in UK Human rights law. However, perhaps the most blatant display of editorial bias on the Daily Mail’s part is that in relation to advice from the Equality and Human Rights Commission, the paper says:

Druids, vegans and green activists should be given special treatment at work, according to ‘lunatic’ advice from the equalities watchdog.

Inevitably the last word is given to a rent-a-quote Tory MP, Dominic Raab, who says

This is a recipe for every crank and crazy to take their boss for a ride. The EHRC has become an expensive taxpayer-funded laughing stock.

So next time you are in London for a drunken night-out in Leicester Square – or celebrating the death of Britain’s greatest Prime Minister – or both – spare a thought that there is a one in 15,500 chance that the officer arresting you is in fact a Pagan, and consequently liable to be labelled by the Mail as a lunatic.