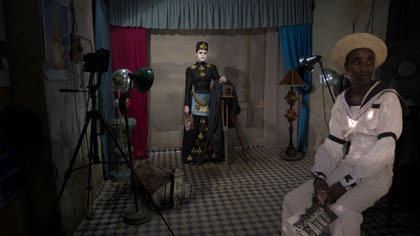 I have decided that the Universe is a giant work of Art. The identity of the Artist, however, defies easy definition. Even the phrase “identity of the Artist” is problematic in regards to the language in which it is expressed, for at least three reasons, viz: “Artist” is in the singular, whereas it ought to be in the plural. Or then again it ought not. Secondly: “identity” is presented as something which can be spoken of with certainty. But identity with what? Identification of a particular soul with a particular body with a particular name at a particular point in the space and time continuum? A soul which transmigrates, a body which contains and is connected with every other thing in the Giant Cosmic Hologram, a name which can be changed easily by deed-poll or just by adopting a different email address? And don’t get me started on wibbly wobbly timey-wimey stuff!

So there I was in Kilburn, at the Tin Tabernacle in Cambridge Avenue to see the art installation “Nowhere Less Now” by Lindsay Seers. Immediately, though, I am asking myself: at what point did I first step into the “Art?” The nature of Conceptual Art is of course that the thought-form in the Treasure House of Images constitutes the real art, whilst its manifestation on the plane of Malkuth merely represents a later- (though not necessarily end-) result of the Evocation. It quickly became apparent that everything about the event was to some extent the manifestation to visible appearance of this original idea. Moreover – like a magician not revealing how the trick is done until after it is performed, the full subtleties were only revealed after the fact – woe betide anyone there who was not immediately alert to the small details from at least the moment that they entered the door!

However there was another twist ending – in the complementary book I was given on leaving the building. The book went into more detail about the event, so of course the Art did not end when I left the Tin Tabernacle: it continued whilst I was reading and appreciating the contents of the book. So in a certain sense it does not end! You, who are reading this blog post now, or whenever, are effectively in a small way discovering one particular end- (later-) result of the artistic process, which effectively makes me an unwitting actor in the Universe of which Ms Seers is the great architect.

But what, I hallucinate that I hear you ask, is the event actually about? Or perhaps, I’m not hallucinating – the voices are real people from the past / present / future / alternative realities / etc. Very generally speaking: a remarkable series of coincidences, which might better be described as Synchronicities, but might best of all be described by an as-yet-uncoined word which is free from the reductionist implications of Jung’s notions of the collective unconscious. Ms Seers explores these “widgets” in a completely unique manner, not dissimilar to a Magician or Shaman conjuring up spirits from the past / present / future / alternative / etc – and then presents the results of these magical explorations in an environment purposely designed for the task. Ms Seers, a self-confessed admirer of a certain Mina Bergson, does not however limit herself to the conventions of the Golden Dawn when performing her magick but instead takes a more pragmatic (from her point of view) approach to performing ritual. Thus to communicate with the spirits of dead ancestors she in effect shapeshifts to become them – one of whom apparently was an initiate in one of the very first Masonic orders for women. To contact possible future incarnations of a certain Individuality she performs an impromptu ceremony, and starts receiving “intuitions” from one such Person… The event thus becomes a Visionary Non-fiction dialogue across the Vortex, with the linear nature of time, person, identity, and cause & effect artfully blurred.

I shall end this review, at least in the current time-stream, with the following anecdote.

Saturday 22nd October 2011. A day I noted in my magical diary as starting with an interesting Lucid Dream in which I was rising on the planes and becoming the Chief Adept of a Rosicrucian order, and continuing with me experimenting with Manifestation. I seem to recall that I wanted to Manifest meeting new and interesting people that day, or some such.

Certain people claim that Cats are the Illuminati because of their innate superiority. I on the other hand claim that the Illuminati are Cats – because it is so difficult to herd them. At times like these, therefore, there is only one thing a hard-working Magician can do, and that is to tie up my sorrows in a bag along with a heavy-brick and drown them in the nearest pint of beer. But not today! The trains that day being considerably further up the creek than usual, I had to leave the pub early, otherwise I would never get home.

So there I was, on a train I would not normally be taking, and I looked round and saw the lady next to me was reading S L Macgregor Mathers’ edition of the Key of Solomon

. I therefore decided to break the first and second rules of commuting by train and introduce myself as Alex Sumner, the World’s Greatest Expert On The Occult. (NB: not talking to people on the tube is the first rule; the second rule is that if you do have to talk to people, don’t go round introducing yourself as Alex Sumner). “I have a particular interest in the work of Macgregor Mathers,” I explained later. “And I am putting together an installation featuring people with heterochromatic eyes,” this mysterious lady replied. “And I just noticed that your eyes are heterochromatic!”

Given that the Art occurs when the Concept is formed, I suppose in a small way I had actually become an actor in the process a year in advance of most people, defying the laws of space and time in the process – which I’ve got to admit made the event in Kilburn feel all the more special. Of course – it could just have been Coincidence. 😉