Line-drawing of a recently re-discovered Defixion or curse tablet.

A slow day on Planet Sumner today, which is why I was forced into reading the Daily Mail, where lo and behold, I uncover a story about an ancient “Defixion” or “curse tablet.” There have been defixiones before but this is particularly interesting because it was recently re-discovered after having been lost for a hundred years.

The Defixion in question seems to be a binding spell against an unfortunate chap called Psellus. Intriguingly, a feminine goddess appears to be invoked: the Italian scientist interviewed tentatively suggests that it might be Hecate. 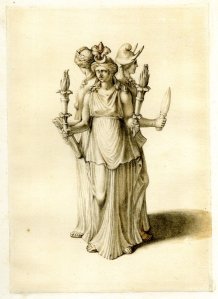 Now I can think of one good reason why it might not be so: the female figure depicted on the Defixion has none of the known traditional symbolism. However, the Fluffy-Bunny Brigade have taken to the comments section denying that it is Hecate, because they can’t believe that she would ever curse anybody.

Sigh. It doesn’t take five minutes to come up with the most sympathetic description of Hecate from ancient times, namely Hesiod’s Theogony:

Whom she will she greatly aids and advances: she sits by worshipful kings in judgement, and in the assembly whom she will is distinguished among the people. And when men arm themselves for the battle that destroys men, then the goddess is at hand to give victory and grant glory readily to whom she will.

It ought not to take a genius to realise that if Hecate is gracious enough to grant victory in “the battle that destroys men,” to her faithful followers, it is not beyond her scruples to see their enemies defeated, i.e. destroyed.

So, whether or not the female figure on the Defixion is question is Hecate, would she realistically have been willing to curse someone anyway? In the right circumstances yes she would – because two thousand years before the invention of fluffy-bunnyism and political correctness, that is how ancient people viewed the gods and goddesses.