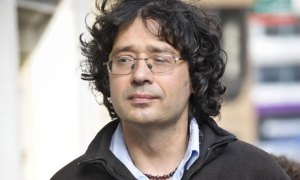 Disturbing news that a Shaman living in England has been convicted and imprisoned for supplying a class A drug. Peter Aziz is an Ayahuascero who has been conducting Ayahuasca healing-sessions in the West country for several years now. Ayahuasca – the Peruvian “Vine of Death” – is technically legal in the UK … but decocting it into an Ayahuasca Tea is not, as apparently this counts as supplying L-dimethyltryptamine (DMT), which in England is a banned substance.

This will come as disappointing news to Ayahuasca enthusiasts in this country, who will now have to travel abroad to Spain or Peru itself if they want to go on a healing session.

Your humble blogmaster whilst not a partaker himself is nevertheless acquainted with more than a few people who have gone on Ayahuasca retreats. The remarkable thing is that in most cases they have come back looking and acting healthier, and reporting beneficial changes, for example, resolution of various psychological issues, or being miraculously cured of long-standing illnesses such as allergies.

However, I have also heard of people who complained that some Ayahuasca sessions were run by people who did not know what they were doing, and hence the sessions did not go particularly well. Clearly, Ayahuasca should only be taken – if it is going to be taken at all – strictly under the supervision of someone who is thoroughly trained in it, e.g. by having studied extensively under Peruvian shamen. Which is ironic seeing as Aziz, who is one of the few British-based Ayahuasceros who is reputable in this respect, has just been banged-up in hokey.

Given that Ayahuasca apparently has therapeutic uses, we should be conducting scientific studies to see if it can be incorporated into mainstream medical practice, and establish a responsible methodology for its administration: not prosecuting Ayahuasceros who act in good-faith, such as Aziz. I do hope that Aziz gets out soon, preferably by having his conviction overturned.