Are Angels Female or Male?

A traditional Christian viewpoint is

Angels are neither male nor female in a human sense, because they belong to a different order of beings. Still, when biblical writers try to describe angelic appearances, they consistently use masculine pronouns and male attributes:
1 Chronicles 21:16: David looked up and saw the angel of the Lord standing between heaven and earth, with a drawn sword in his hand extended over Jerusalem.
Luke 24:4 (at Jesus’ tomb): While they were wondering about this, suddenly two men in clothes that gleamed like lightning stood beside them.
Revelation 10:1: Then I saw another mighty angel coming down from heaven. He was robed in a cloud, with a rainbow above his head; his face was like the sun, and his legs were like fiery pillars.
The idea of female angels, then, must have come from outside Judaism and Christianity. … Many pagan religions featured winged servants of the gods … and some of these were distinctly female.

The foregoing editorial betrays its patriarchality, because some of these winged beings weren’t servants of the gods, but gods and goddesses in their own right, e.g.: 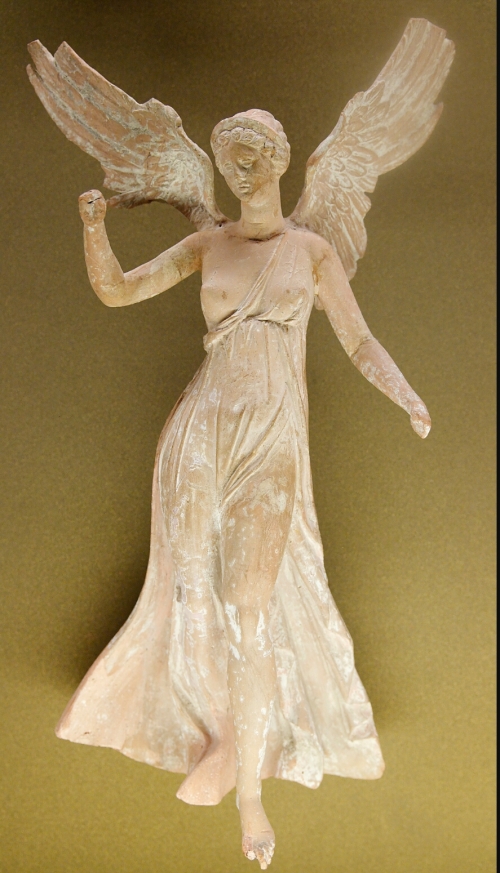 However, a separate website points out that “[w]hile angels generally appear as men in Scripture, Zechariah 5:9 may suggest this is not always the case.” I.e.:

Then lifted I up mine eyes, and looked, and, behold, there came out two women, and the wind was in their wings; for they had wings like the wings of a stork: and they lifted up the ephah between the earth and the heaven.

In Islam, the position is more neutral, i.e. that it is impossible and indeed inappropriate to say one way or the other:

The angels are not regarded as either male or female. As for being female, Allah has stated that they are not female … As for describing them as male, no such thing has been narrated.

In the magical system of the Golden Dawn, there is supposedly a way of ascribing gender to an Angelic being, to wit: analyse the Hebrew letters making up its name in terms of whether they are masculine or feminine – the majority will determine the overall gender (or “epicene” if there is no majority). However – this applies only to the Telesmatic Images of these Angels – in other words, the images that we create in order to visualise them, not what they necessarily are in themselves. In terms of actual gender, the GD accepts that Angels do not have gender in the sense that we humans understand the notion. However, unlike the chauvinistic examples of exoteric religion quoted at the beginning of this article, the GD accepts that Angelic beings do appear as both Male and Female (or other).

This is rather good news for members of the GD, as it has been pointed out that the Secret Chief of the Golden Dawn is an Angelic being. Therefore Fratres and Sorores are free to believe that the Secret Chief is either male or female, and can regenerate between the two as the occasion arises! 😉

2 responses to “Are Angels Female or Male?”